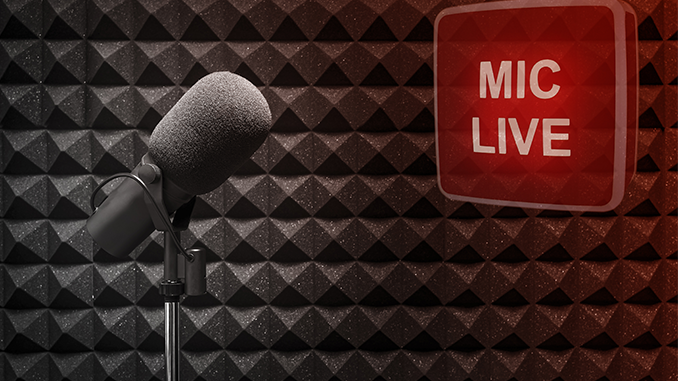 Andy White has been regularly producing podcasts, for clients large and small since 2006, including Internet Marketing, which is regularly in the featured list under the Management and Marketing categories in iTunes. In an effort to reach more people, Andy is now writing a book and running training sessions to teach people how to turn their passion into an audio podcast. I have asked Andy to share some audio tips and advice that he’s learned through his experience as a podcaster.

About 6 months ago I purchased an SE Electronics 2200T valve condenser studio microphone. I’ll admit, it was a bit of an impulse purchase. I’d wanted to get a really good quality condenser mic for a long time; I was getting fed up of using my Shure SM58 and Samson C01U USB mics – not because they’re bad mics, I just wanted to move to the next level. The man in the shop directed me to the SE range of studio condenser mics. He showed me the two main models and explained how the valve model, yes it contains a real valve, gives a warmer, more natural sound. I had to have it. So I left the shop £300 lighter and with a new friend to play with.

As the weeks passed however, it slowly dawned on me that this mic wasn’t the best choice for my studio setup. Don’t get me wrong. This is a beautiful mic. It reproduces beautifully smooth lows. It has an exquisite midrange rendition. It has crisp, clean, highs with a depth of detail that would put an audio electron microscope to shame (if such a thing actually existed). Yes, it reproduces in startling detail anything directed at it, including the seagulls outside, the fridge, the hum from my computer, and last but not least, the echo of my voice as it bounces off the hard shiny office surfaces.

One day as I was researching how much acoustic padding for the entire office would cost, I remembered a comment Leo Laporte once made about his beloved Heil PR 40 broadcasting mic. He mentioned the word – “rejection”. Normally that is a negative word but not when talking about microphones. Rejection refers to the ability of a mic to only pick up sounds coming from the front axis and picking up sounds less from the side and behind. He also mentioned a related parameter, sensitivity. This is all to do with how rapidly the pick up falls off as the sound source is moved further away, the less sensitive, the more rapidly the fall off. I realised that a mic with strong rejection and low sensitivity is exactly what you want if you are recording in a typical office or non-studio environment.

From that point on, I started using my Shure SM58 again. Of course, the startling clarity wasn’t there, but I welcomed the return of the warm, smooth, slightly muted sound that only the SM58 can give. I also noticed that the troublesome background noise from my office was significantly less prominent. The Shure SM58 has pretty good rejection and isn’t too sensitive, it’s not as good as the Heil PR 40 by a long chalk, but nevertheless a big improvement over the SE. Here’s the technical crux of the matter. The Shure SM58 is a dynamic microphone, the SE 2200T is a condenser. Different technologies with different characteristics. Condensers typically have high sensitivity, dynamics have lower sensitivity.

With the SM58 I use a pop filter and keep my mouth very close to the mic. Doing this makes use of the “proximity effect” which boosts the bass in your voice. It also means there is a bigger difference in loudness between your voice and anything else that tries to interrupt, such as amorous seagulls outside the window. Try doing that with the SE and you’d have to deal with some serious clipping of the audio (Tip: never shout into a condenser mic).

The SE 2200T Valve Condenser is a fantastic microphone – but it’s best used in an acoustically isolated and padded recording environment. It’s not so great for the typical office or home studio. The motto? Unless you’re going to spend hundreds of dollars sound proofing and padding your recording environment, don’t make the mistake of buying an expensive condenser mic that will pick up extraneous noise, get a dynamic mic that has good rejection and isn’t too sensitive, such as the Shure SM58 or Heil PR 40.

By the way, I’m now saving up for the Heil. Anybody want a second hand SE 2200T Valve Condenser microphone, one careful owner?

For more information on Andy White and his book, visit his website.