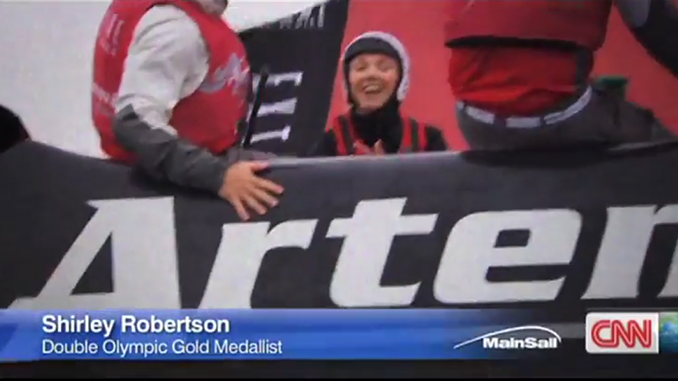 I’ve had the pleasure of becoming acquainted with Wez Maynard (@Wez on Twitter) of OC ThirdPole.  OC ThirdPole is a world-wide sport events company, marketing agency, and the team behind the Extreme Sailing Series.  Wez serves as their web & design manager.

Here’s some background on the sport, from the Extreme Sailing Series website:

It’s a sport, helming state-of-the-art multihulls on very demanding courses with the most respected skippers lining up to do just that, competing so fiercely that heart-stopping close encounters always feature on the menu. It’s also a spectacle, and the public has full access to the action from the shore in carefully chosen venues, combining challenging sailing conditions and spectator-friendly configurations. It’s a VIP experience, and “hot seats” are available onboard, a fifth man being able to join the four-man crew in order to get a firsthand experience and feel the excitement. Not willing to compromise, organisers OC ThirdPole have created a formula where serious competition and spectacle go hand in hand, the rapid success of the Extreme 40 series proving how well balanced the recipe is. Since 2007, the Extreme Sailing Series has become a benchmark in the sailing world, steadily growing and attracting the biggest names in the sport whilst proving to be an extremely efficient partnership opportunity in these uncertain economic times.

You’ll find the above strongly reaffirmed in the following promo:

So, Wez has been producing beautiful race footage for the series, but was interested in adding live coverage in to the mix.  In evaluating his options, Wez noted that in addition to live streaming, Wirecast enabled simultaneous delivery to multiple destinations, and that he could also record a high-quality copy to disk.  Wez went with Wirecast.

Wirecast made its debut with Extreme Sailing Series last weekend in the Trapani region of Sicily.  I had the opportunity to ask Wez more about the event:

You just used Wirecast for the first time at the race in Trapani.  How did that go?

Flawlessly. We had previously used the Ustream console for the Act 5, Cowes. So it was logical to cut out the middle man and go straight to WireCast. The need to produce to our iOS application and YouTube made the choice for us.

Tell me about the race itself….  What were some highlights?

Leigh McMillan’s team on The Wave, Muscat made it two in a row winning Act 6 of the Extreme Sailing Series™ in Trapani on the back of their Act 5 win in Cowes, UK.  It was an incredibly close finish to Act 6 – after 34 races in total, The Wave, Muscat took it with 283 points [11pts for a race win], just 9 points ahead of the French team Groupe Edmond de Rothschild on 274, and Oman Air, with Ben Ainslie at his first Extreme Sailing Series regatta, in third on 266.5. A mere 3.5 points behind were Max Sirena’s Luna Rossa, and only three points behind them Hagara’s Red Bull Extreme Sailing.  The compensation for Sirena and British helmsman, Paul Campbell-James, is that Luna Rossa’s result here elevates them to the top of the 2011 Overall Extreme Sailing Series leaderboard, 1 point ahead of Groupe Edmond de Rothshild.

We operate two kinds of feeds at our events – a fully produced Live experience, this is usually done by a TV production team. The second is our own produced low-fi web camera setup.

For this event we opted for our own WEBcam setup, we used a static high mounted camera which we took a BNC cable from and had this inputted into a digital converter. We fed the local event commentary into this same converter via composite and took a firewire out into my mac book pro. It was then we produced the content using WireCast. For future events we are looking to make use of multiple cameras – to allow greater flexibility in the content we can produce.

Do you have the Wirecast footage from the race available?

Yes, the Live tab on our YouTube channel has the footage we shot using Wirecast (edit:  I’ve embedded this footage below):

What problem was Wirecast able to help you solve?

Multiple distribution was an issue before we found WireCast. The simple broadcast settings make using WireCast a dream.  I don’t think it’s an over exaggeration to say I have rarely encountered a piece of software that is so intuitive to pick up and run with. Top draw!

When will you broadcast again using Wirecast?

The next event is on the 30th Sept in Nice, France. Full details here.

Thanks, Wez!  Please check out the Extreme Sailing Series website for more information and some great videos.  They’re also on Twitter:  @extremesailing.