When streaming with Wirecast, the layers that make up your main shot list are extremely important.  I like to think of them as individual televisions stacked on top of each other.  If they are all playing at once, I can hear the audio from all of them, but I can only see what is on the top.  While this set up can be a bit confusing at first, it allows for some great customization.  You can have your live shot playing and check to make sure your preview shot is working well, all while monitoring additional pictures, media and camera feeds on lower layers.

We have a nice system here at Telestream that incorporates everything we need into a well organized and easily manageable setup. Let’s see how we do it.

Layer one can be described as the most important layer, not because it has the most important content, but because it will never be obscured by anything else in your main shot list.  Whatever you put here will always be “on top” of everything else.  What do we put here? Our logo!!  A nice, semi-transparent logo in one of the corners that can stay throughout your stream is an indispensable addition to any live broadcast. 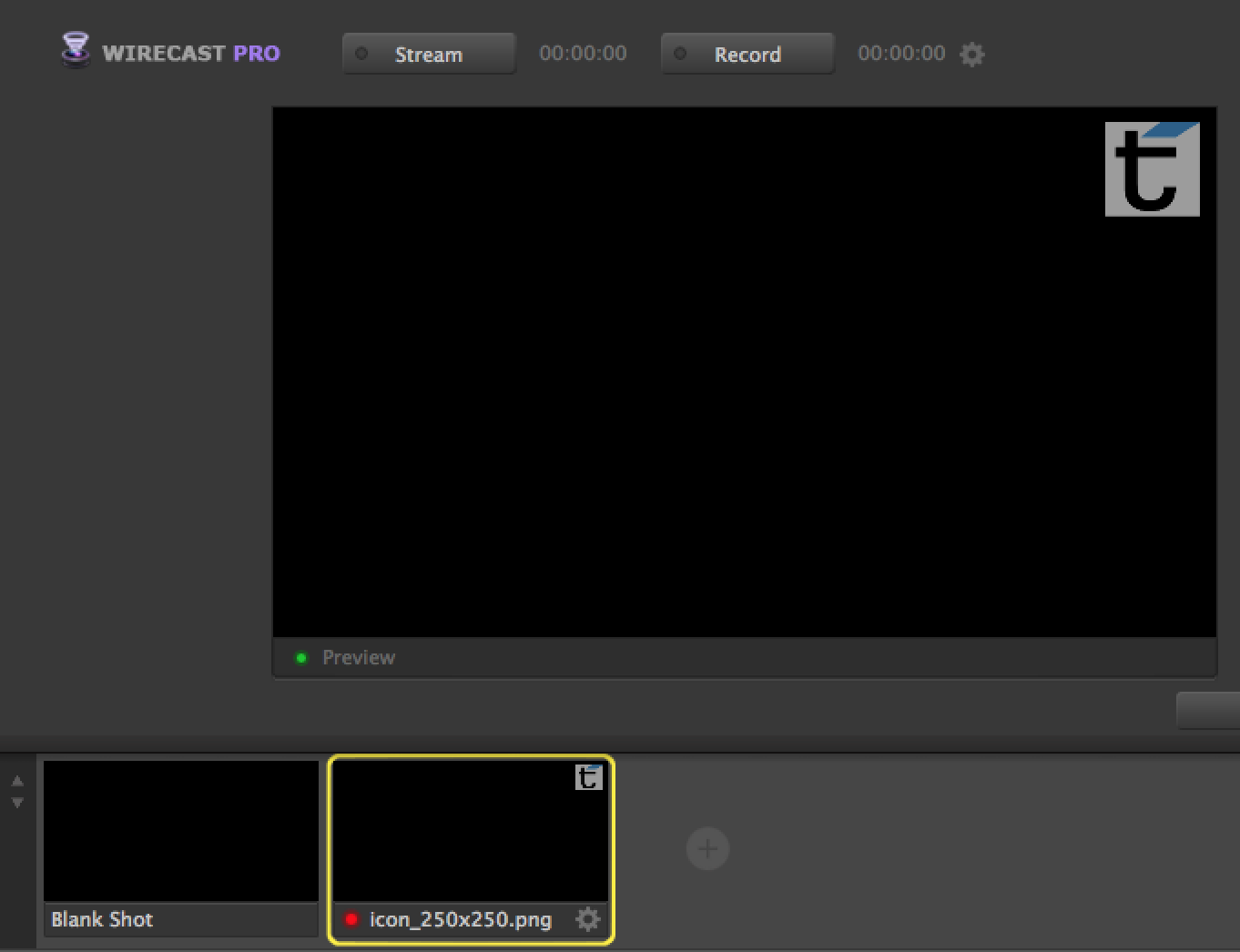 Now that your first layer has your show/company logo, think what else you might need on top of all other footage….your name of course!  Depending on how many people, or segments, you may have during your live stream, you will need at least one, and sometimes multiple, lower thirds.  Prefabricating the lower thirds, and housing them in layer two will allow you to always have a quick and easy way to overlay some necessary information! 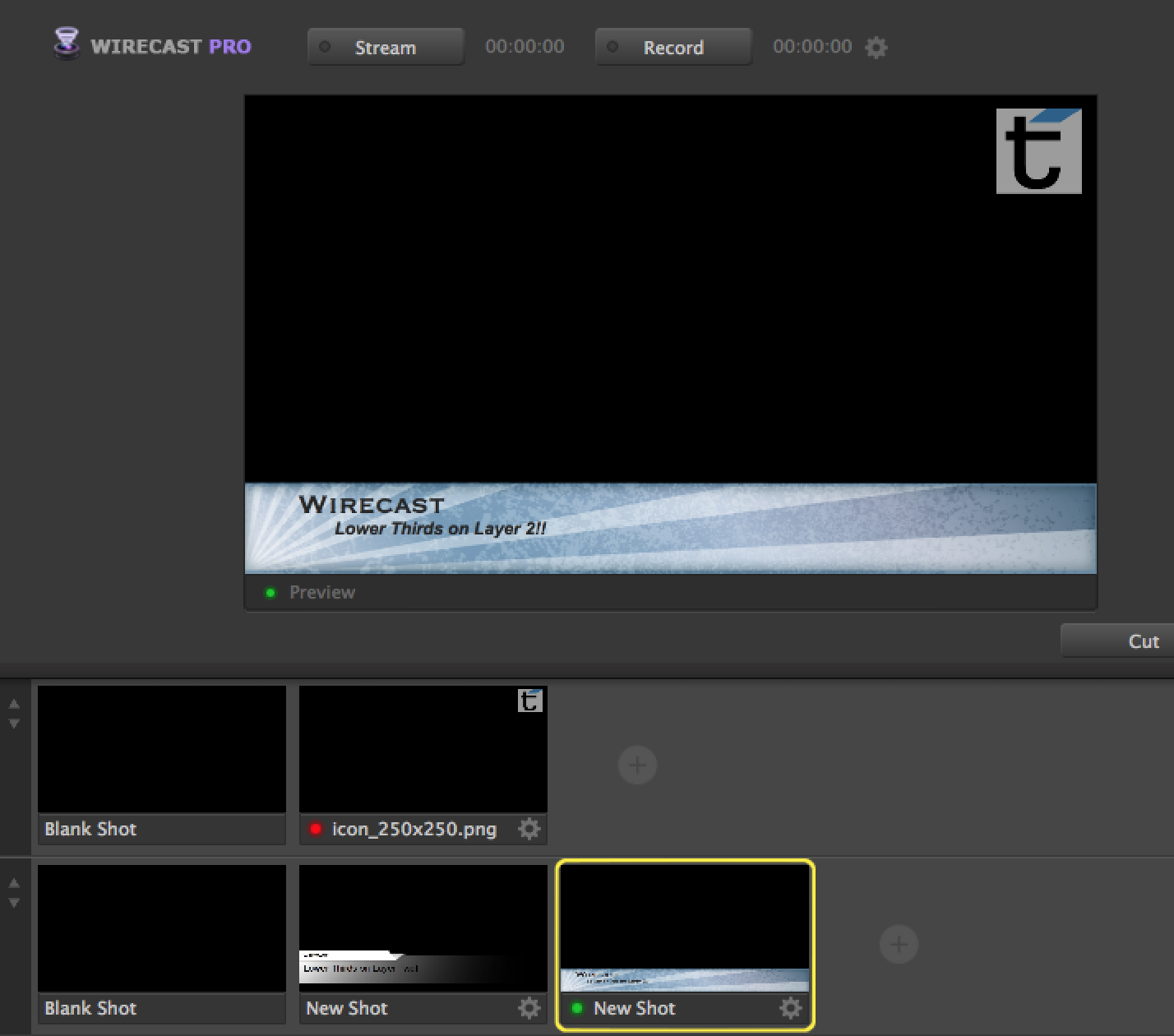 Layer three is where Wirecast really shines.  Live video is what makes your broadcast so awesome, and this is the layer we use to add all of our camera shots.  Whether you are running a single webcam, or multiple SDI camera feeds, as long as you have them in layer three with some overlays in the top two layers, your show will look awesome. 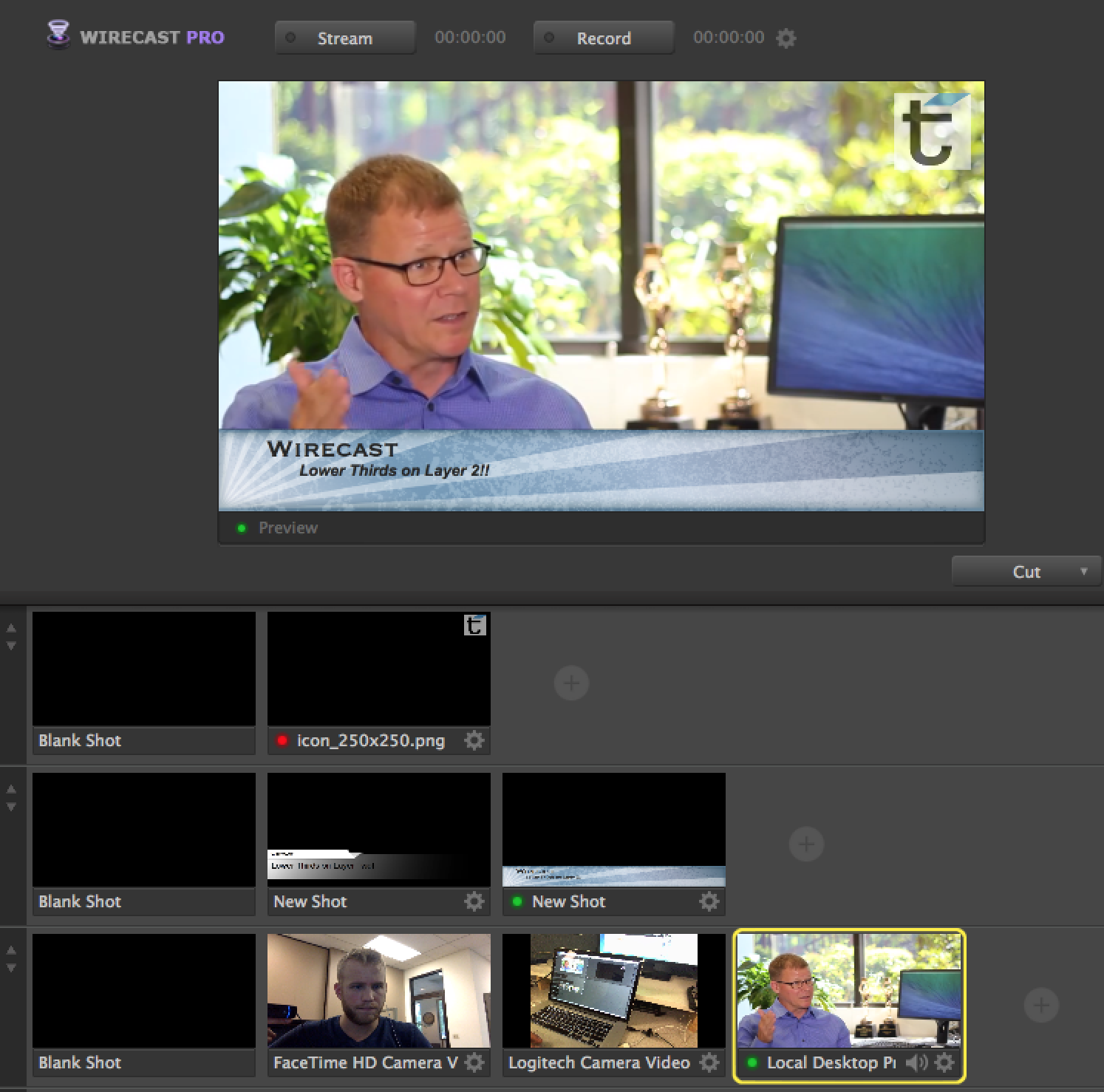 This layer can be overlooked if you don’t find yourself running extra media, but if you do, put it here.  Pictures, videos, animations…whatever you might need to supplement your camera feeds has its place here.  The layers at this point aren’t the most sensitive. If you put your cameras below your extra media, you probably won’t encounter much of a problem, but it is nice to have the “less important” parts of your broadcast toward the bottom. 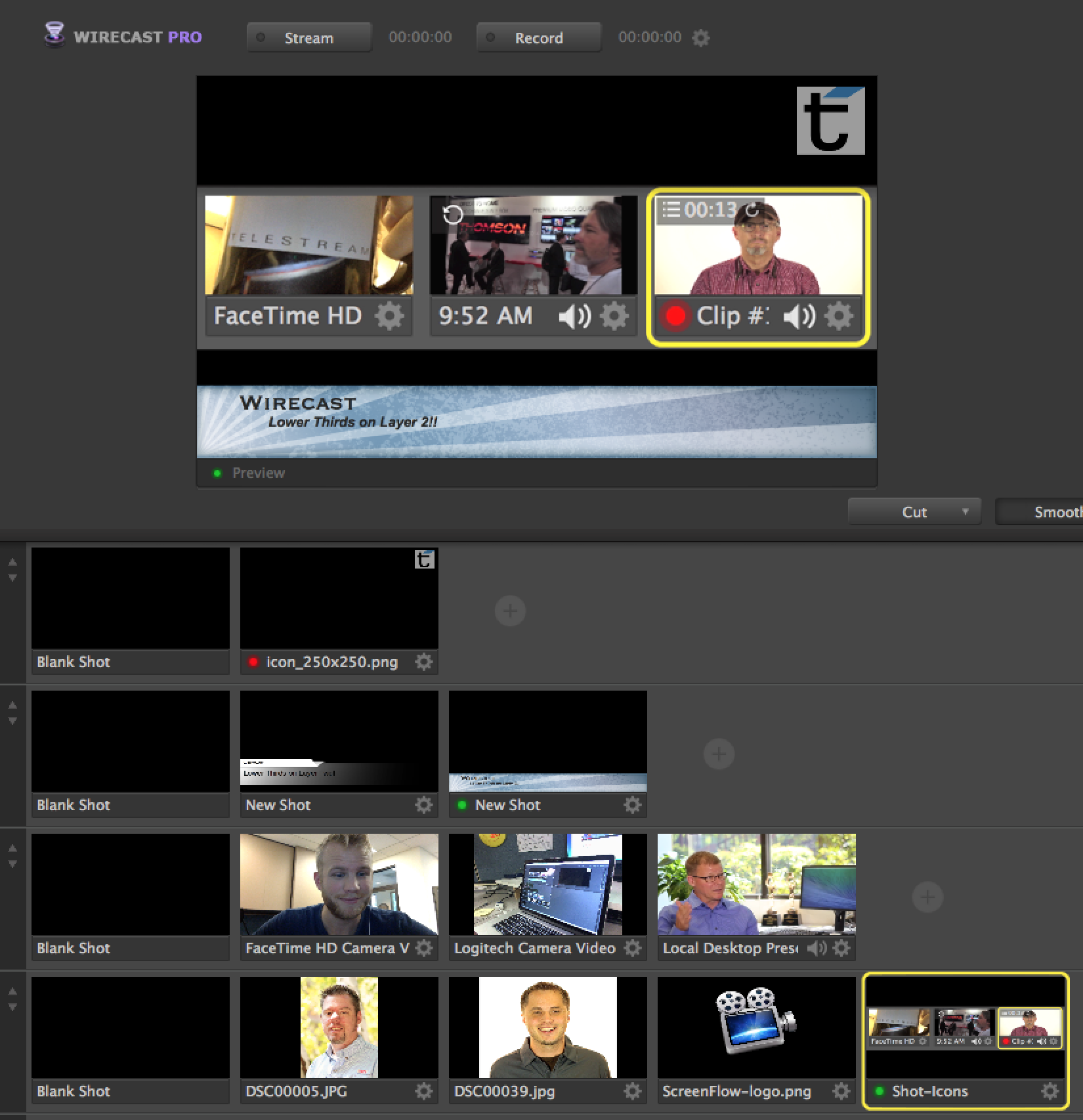 At the bottom of your main shot list is audio.  In direct opposition to what I just said about “lesser” media going toward the bottom, audio is arguably one of the most important parts of your broadcast.  Let’s go back to the stacked television/layers analogy.  While the top television is the only one we can see, we can hear all of them because the audio cannot be blocked.  By putting your audio inputs at the bottom, they will filter “up” through your camera feed and media and be a constant in your broadcast. **Just make sure you stay on top of which audio you have live!!** 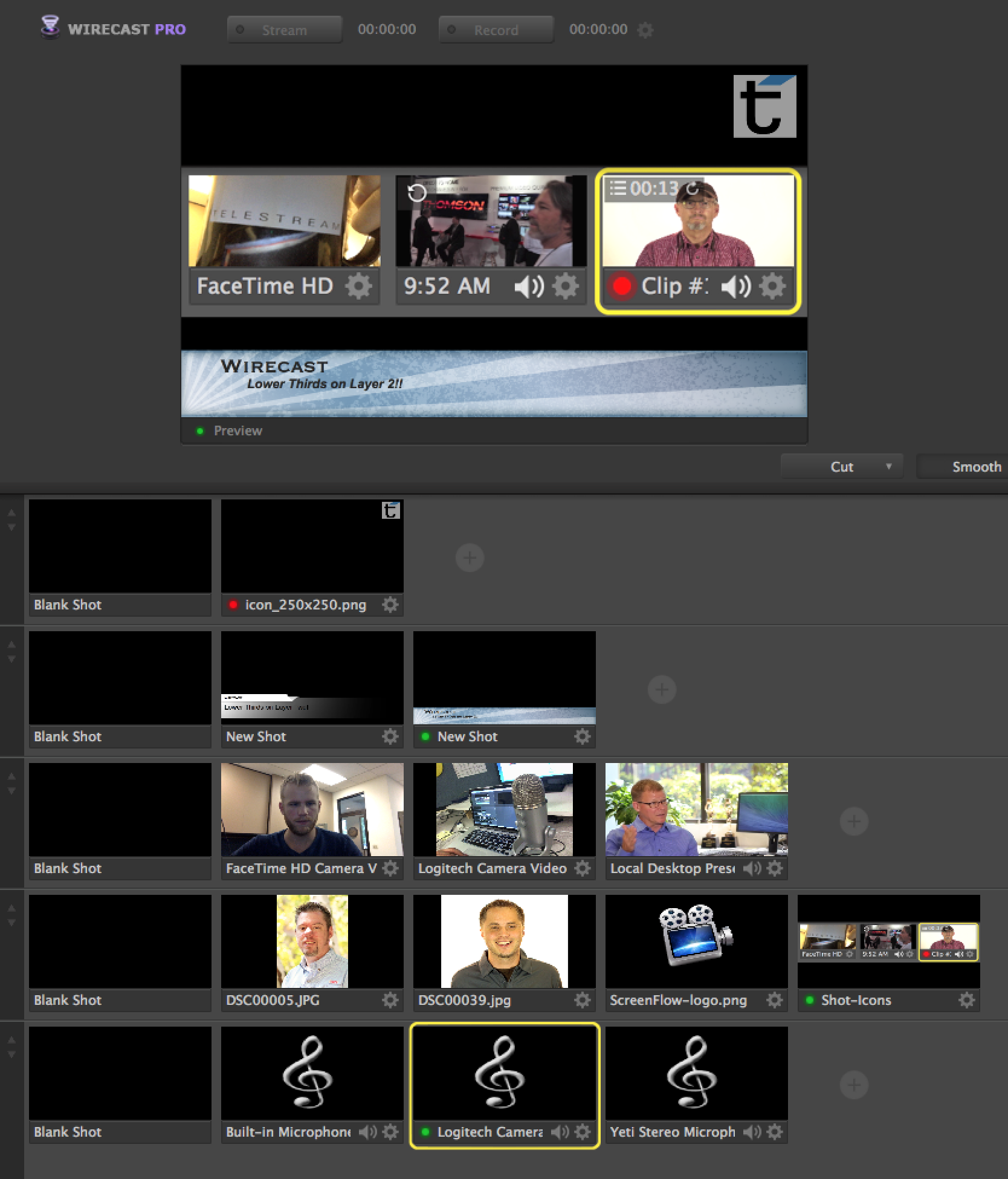 One of the best parts of Wirecast is its ability to be customized in any way.  Want to change up the layer sequence? Go ahead! Want to put all of your shots on one layer? If you can make it work, go for it!  We like this tried and true method, but there is no perfect way of setting up your broadcast.  Once you dial in what works for you, save it as a Wirecast document, and use it forever!

Do you have a system you like better? Let us know in the comments!