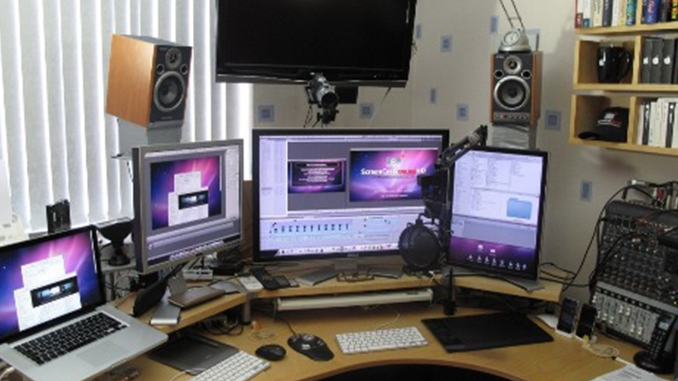 For this week’s “Meet the ScreenFlow-er” post, I am honored to bring you Don McAllister, the man behind ScreenCastsOnline. ScreenCastsOnline is a weekly video podcast of computer-based video tutorials which cover many different topics but focus mainly on Mac- or web-based topics. Don does both a free feed, and a membership site, and has grown his membership into the thousands. As a professional screencaster, (yes, he quit his day job to do this!) Don has a great set-up and an interesting workflow. I hope you enjoy the interview with him as much as I did:

How long have you been screencasting?

I’ve been screencasting more than 5 years now and have made over 250 screencasts, roughly one a week since I started. It’s probably fair to say I’ve tried every screen capture application for the Mac but have stuck with ScreenFlow since it was launched.  When I started, there was no equivalent to ScreenFlow that allowed me to both capture and edit in the same application, so I used many different capture applications but always did my final edit in Final Cut Pro. I’ve become so used to FCP that I still use it as my primary editing package, but use ScreenFlow for the capture and initial editing.  ScreenFlow seems to be extremely stable and very fast at saving the raw captures, this is very important to me as it doesn’t get in the way during recording.

For what purpose to do you make your screencasts?

I screencast professionally and run an online tutorial site called ScreenCastsOnline, specializing in screencasts for the Mac. ScreenCastsOnline was one of the first premium podcasts launched back in 2005 and each week I create and publish a long form screencast on various aspects of the Mac, from using the Mac and OSX, to covering many of the leading third party applications and utilities. I also do a special kind of show called a MacMontage which is a collection of smaller hints and tips.

What kind of studio or set up do you have?

I have two machines that I use:

A MacBook Pro which is configured as the screen capture machine and has a dedicated user account set up specifically to record the screencasts. This has an SSD drive and a second standard drive which allows me to use the MacBook Pro as my mobile machine (when booting of the SSD drive) and as my dedicated screencast capture machine when booting off the standard drive. I even did a show on upgrading to an SSD drive and installing the secondary drive. The MacBook Pro also has and external 20″ monitor attached

My main editing machine is a 2.8GHz Quad-core Mac Pro (Pre-Nahalem) with 16GB RAM. This also has an SSD boot drive along with a RAID stripe of three drives for performance. I also have a Matrox CompressHD card installed in the Mac Pro for encoding via Compressor. I use a 30″ Dell monitor and a second Dell 20″ monitor in portrait mode on this machine.  I’ve moved to a pen tablet rather than a mouse for both editing and for general usage. It’s much more natural and feels much more precise. I use a Wacom Intuos 4. The other bit of kit is a Shuttle Pro 2 which acts a jog wheel and provides me with some programmable keys for creating key combos and shortcuts.

As far as audio is concerned, I have a Heil PR30 microphone and a Mackie ONYX 1220 mixer with two Edirol USB interfaces for both the MacBook Pro and the MacPro. The only outboard effects processor is a dbx-266XL which I use mainly as a noise gate to cut down the noise in the studio when recording. I do no processing of the audio in post production.

What do you find to be the most challenging aspect of creating your screencasts?

For me, the most challenging part is the recording. I do a fair amount of prep but the recording is where it all comes together. I find you really need to be “in the zone” or at least in the right frame of mind to take on a recording. As my shows are usually between 30 and 40 minutes long, the recording time can quite lengthy and sometimes require quite a few takes. It can be difficult to maintain the level of concentration needed to complete a full recording, especially if things don’t go strictly to plan.

What’s the process you use for creating your screencasts?

I usually script a short intro to position and put the screencast into context. I then create a high level outline of what I want the show to cover and how I’m going to approach it. I find OmniOutliner invaluable for those as you can embed images and web links directly into the outline to prompt me as I move through the outline. The bulk of the show is not scripted at all. It would be impossible to produce a long form show every week if I had to script it.

Once I start recording, I record in small chunks, never more than 5 minutes in length. These may contain multiple takes if I fluff my words or select the wrong menu.  The video and audio is captured at the same time.

When the recording is finished, I do a preliminary edit in ScreenFlow to remove any dead space or errors, and then copy all the original ScreenFlow files to the MacPro. I then export them in lossless format and convert in Compressor to AIC files for final editing in Final Cut Pro. Once in FCP, I use Motion for lower thirds and other graphics until I finally create the finished screencast.

The master version is then output in ProRes from FCP and then transcoded into the various HD and other versions using Compressor via the CompressHD card.

Are there processes you’ve changed as you’ve gotten more experienced? What were they and why?

The transcoding in various formats is something I’ve experimented with as I’ve needed them. If I was starting to create screencasts today, I’d probably be able to do everything in ScreenFlow and just output using the presets – much simpler!

Do you have a screencast that you’re especially proud of?

That’s a hard one! Each one seems to get better as I get more experienced! I keep raising the bar on myself and consequently, keep pushing myself. I enjoy the screencasts where I’ve incorporated iPhone applications. The best thing is to go to the main ScreenCastsOnline site and see the most recent one!

What other programs/accessories do you use besides ScreenFlow to create your screencasts?

I’m a great believer in not using a picture in picture or live video in my screencasts. I don’t think it’s necessary and can detract from the content. Besides, I have a great face for screencasting and not appearing on screen!  Having said that, I have started up a ScreenCastsOnline channel on YouTube and do make the occasional appearance there. I use a Sony HDR-SR11 HD camera or a Kodak Zi8 when needed.

I use the Heil PR30 microphone. It was recommended and I’ve never tried anything else. I could upgrade to the PR40 but not desperate to do so

As I mentioned before, I use Final Cut Studio a lot. The only other application I use is a donation ware package called Lillipot which flattens all my QuickTime movies and makes sure they are optimized for streaming.

Where are your screencasts used primarily?

I have a number of RSS feeds. The main one is for the free shows (one show a month is completely free). You can also find a streaming version in the show notes. ScreenCastsOnline Extra members get a full show every week in a choice of resolutions. There are special private feeds for these requiring a username and password but they can still download them via iTunes. There’s also a private members website where they can download or stream all the screencasts.

Do you have export settings you primarily use?

I’ve recently started using the CompressHD card from Matrox even though I have a quad core machine. I found that encoding via Compressor (the encoding part of FCS) was very unstable and gave me all sorts of headaches. The CompressHD card is a hardware-based encoding solution that is super fast and very stable. It comes with its own presets that I’ve modified slightly. I produced four different versions for the members and two for the free feed:

Member versions (all with chapters)

What advice would you give to someone just starting out screencasting?

What’s the stupidest mistake you’ve made when creating a screencast?

I was doing a show on Snow Leopard, specifically QuickTime X and demoing the screencapture capabilities. I’d captured my screen and blew it up full-size, then started to explain something. I then forgot it was a screencapture and started to try and access the menus of the screencapture….  Well it was funny at the time! I ended up leaving it in the final show.  I must get around to producing a blooper reel at the end of the year, but then people would find out that I’m not infallible!

Besides ScreenFlow what’s your favorite program for the Mac?

Now that’s a hard one!

I suppose my favorite would have to be LaunchBar, closely followed by TextExpander. I’ve done screencasts on both and my next screencast is on TextExpander 3 which has just come out. Both are totally indispensable apps for the Mac.